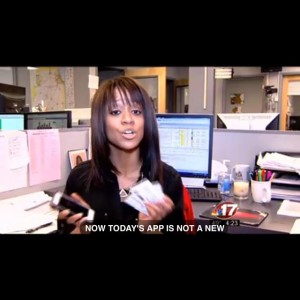 Ashley Aviyah’s Resume Reel. Ashley is a morning show reporter for KTVO in Missouri.  I added a bit of personality in the end and ended it with one of my favorite editing experiements (the credits for another video while syncing the cuts to the song… I love editing!) 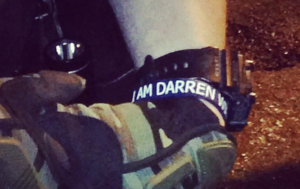 Just in case anyone wondered why people in Ferguson are so angry… uhhhh this might have something to do with it. If you don’t get it (ahem) let me explain…

I am Darren Wilson in the eyes of the Ferguson says I am a killer cop. So of course those who wore those are now teasing and angry fire. What happens when you put your hand in a fire? You get burned.

The image shows on-duty Ferguson law enforcers wearing the band in support of their colleague. It was posted on Instagram and has been shared numerous times over the week. Thanks to the sharing, the band is now banned.

Federal officials stepped in and saw the light. Thank goodness. But only while in uniform and on duty…

Ferguson Police Chief Thomas Jackson agreed to bar his officers from wearing the bracelets while in uniform and on duty, and to ensure that other local police agencies did too, according to a letter released Friday by Christy Lopez, deputy chief of the special litigation section of the Justice Department’s Civil Rights Division.

Jackson did so after officials in the U.S. Department of Justice brought the issue to his attention, alerted by residents during community meetings earlier last week who complained they had seen officers wearing the bracelets on patrol during protests Tuesday, according to the letter.

Residents made a good point that the bracelets continue the Us vs Them mentality. After a weekend of more unrest and violence that isn’t something that needs to happen. Even if cops wear this off duty, it is still horribly offensive.

Switching gears,  the violence escalated this weekend as Saturday an officer was shot. Luckily the shooting wasn’t life threatening. At least the officers have the body cameras now to help figure out what happened right?

When asked to provide the body camera video from the shooting, Ferguson Police Chief Tom Jackson said the officer had a camera, but it was not turned on.

But of course. So what is going to happen now that the camera was not turned on? Is that an excuse? The next time a civilian is shot will the camera be on?

The money mob [M($)B] is a group of conscious business minded individuals who make a conscious effort to improve our local economy by supporting small independently owned businesses. Once a month we get together at a different business, support the business by spending $10 or more. During that time we may have vendors, a discussion about a economic topic or another business minded event. Before the actual mob we put together a video introducing the next location and the owner. For more info you can visit http://www.moneymob.org. The next M($)B is Feb 26th at 5pm at  H-Dogs Chicago in the Bronzeville Neighborhood! (My Hood) and it’s the day after my birthday! SO hey now! Come celebrate with me! 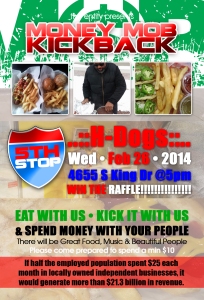 Today I was having a conversation with a dear friend of mine who brought up the idea of parental guilt and wondered if it was actually harming the community. We talked about a few instances of parents who coddle their children (old and young) and why this happens. While each situation is different I’m sure… I cannot shake the feeling that guilt is probably behind much of it.

When you feel guilty about a situation, you tend to try to make up for the guilt with action or items etc… But what if you have so much that you blame yourself for their actions so you constantly try to make up for their choices by letting them run all over you.. Doesn’t sound too far from a possibility right? But let me not run too far with this theory. First I’ll look into the idea of this parental guilt and then let’s see some of the possible long term effects on the community.

Every parent has felt guilt over something in their child’s life. I am not saying this is bad, not normal or unhealthy. We are parents, not perfect. Many of us have felt guilty over taking your child to school when they had the sniffles so you could work, dating while raising kids or that time that you turned your back and the little one had a bit of an accident. It happens, right?

Guilt often allows us to gauge our actions and helps us refrain from potentially destructive behaviors that could cause harm. However, guilt can also be misdirected and debilitating to our ability to function powerfully in life. It’s what you do with that guilt that makes it unhealthy. The result of unhealthy guilt can be to make us feel bad about our decisions and behaviors. This unhealthy guilt “haunts” us and negatively effects lives over and over.

I’ve heard many mothers mention the idea of “Single Mother Guilt”. Well, 67% of children in the African American community come from a single parent household (Kids Count Data Center), so that’s a lot of guilt.  Single mothers can feel guilty because they brought a child into the world that is out of the “ideal” type of situation. Often single mothers cannot stay at home with the child and that brings more guilt. Now keep piling on items that can cause guilt: not being able to afford items, children blaming you for negativity, lack of a father in the home, children having special need.. etc.. Some mothers (and parents in general) respond by being a “helicopter parent” aka coddling the kid.

Much of this guilt is from the way society views single mothers and the problems this causes for the child. Diane Eyer, in her book Motherguilt, succinctly summed this negative myth as:

Being a single mom is basically immoral and selfish, the reasoning goes, since it deprives children of an important paternal role model and source of income. Single mothers are seen as engenders of the underclass-the juvenile delinquents, drug addicts, and violent criminals who plague the country. (1996: 29)

Who wouldn’t feel guilty about that? The single parent myth has risen steadily since the 1950’s (and is constantly higher in the African American Community) with the decline of the white picket fence with its working father and stay at home mother. Read more about  Deconstructing Mother Guilt here

Coddling due to Guilt

One response to feeling guilt in parenting can be to continue to coddle your child even after infancy.

Coddlers step in to negotiate for their child instead of letting the child work out problems for himself. They intervene, regardless of the severity of the situation. Parents who coddle their child provide instant gratification for things the child wants as opposed to what he needs. (MetroFamily Magazine /November 2010)

Instant gratification… we have a generation full of people that think in the “Me me me… now now now” mindset. Could this be from being coddled?

So coddling can be bad right? But once the child is grown is it okay?

“Parents should provide guidance, but to constantly intervene prevents a child from learning. You put your child at risk when he doesn’t learn to communicate and interact with people.” (MetroFamily Magazine /November 2010)

As new research shows that members of Generation Y are entering the workforce with an inflated sense of their abilities, principals are warning ”helicopter parents” against putting too much pressure on children to be successful, which could discourage them from risking failure.

According to a study by University College London, risk-taking behavior peeks during adolescence. Teens are apt to take more risks than any other age group. Their brain programs them to do so. It’s part of growing up. They must test boundaries, values and find their identity during these years. This is when they must learn, via experience, the consequences of certain behaviors. Our failure to let them risk may explain why so many young adults, between the ages of 22 and 35 still live at home or haven’t started their careers, or had a serious relationship. Normal risk taking at fourteen or fifteen would have prepared them for such decisions and the risks of moving away from home, launching a career or getting married. – (Growing Leaders Blog)

Here are a list of problems coddling and parenting through guilt can create in an adult life:

Coddling Parents  do too much for their children who were become less resilient and unable to cope with failure. Failure is a part of life and every successful adult has failed and pushed past it. But if a formerly coddled child turned adult cannot core with failure how will they ever attain success?  Instead they turn back to their helicopter parent to take care of them and they resort to child like behavior of letting the parents take care of them and fight their battles. Where does guilt come in hand?

The guilt a parent feels for their child’s hardship and problems can cause the parent to place responsibility on themselves and in turn allow the child to behave this way.  Therefore you have a generation of grown children who do not take responsibility for their actions, living with their parents who are raising their grandchildren and creating a cycle of weakness and failure. Or a child that blames everyone else for their problems and expects the outside world (or spouse) to take care of them like their parents always have. Am I being too extreme? Maybe. But we all know it happens. So take risks, let the kids fall and fail. When they disobey a parent hold back the instinct to rescue just for a minute and let them feel a tad but of pain.

What say you? Do you think this is a true problem for the community? Does guilt have nothing to do with kids running over parents later in life? Or is it perfectly find to coddle?

Here is my presentation for tonight’s event at Rainbow PUSH Coalition for Social Media Week. I discuss the power of consumers in the new social media world and also new rules of social media for businesses!

Error: Twitter did not respond. Please wait a few minutes and refresh this page.

There was an error retrieving images from Instagram. An attempt will be remade in a few minutes.